I may have mentioned my recent obsession with little jump rings…

I’ve discovered orbitals.  For those of you who don’t know anything about chainmaille patterns, an orbital is when you have two (or more) rings in connection with each other, with a third (or more) ring circling that connection point.

Within my exploring on the WWW – I found a YouTuber who put out a video showing how to make a flower pendant with orbitals.  The result … is PRETTY.  She calls it the ‘Reverse Tao’ flower, and the tutorial is one of my new favorites – simple, with the focus on the hands and the rings and how to combine them.  No extra flashy graphics in the front, no long-winded intro speech before you get to the meat of the tutorial, no loud hip-hop or pop or rock music.  Just the build.

I like a tutorial that simply gets down to business without all this nonsense of ‘gettin’ down B4 Bizniz’.

I did have to do some tweaking to this pattern.  The ring size as listed in the tutorial created a form that was rather too loose for my liking, so I scaled the AR down to a tighter 6.9, and I added some additional rings to really firm things up.

I like my chainmaille things tight 😀  and I’ll be listing a few of these lovelies on my Etsy shop this weekend.

I’ve found yet another pattern which uses my favorite ring size.  I use these particular rings for 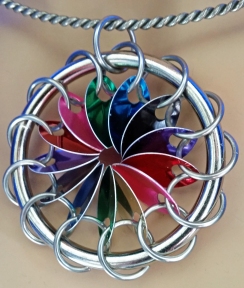 and they make a great, quickie bail.

So I finally bit the bullet and ordered a huge amount of them in a variety of metals – I even found them in Niobium, which equals bright, shiny colors.

I got some serious maile-ing to do over the next few weeks, because I have my first ever show coming up.  Now, granted, this show is at a vape store grand opening, so I don’t exactly ‘fit in’ with what the rest of the vendors will be offering – but I’ll happily take the exposure.

In the keto world, I’ve been exploring cheesecake.  My mousse fluff mimics the filling in a cream puff, but I’ve never been really interested in the cream puff shell – so my explorations went to the next cool and creamy dessert-type thing that came to mind.   And – again thanking the technology that allows people all across the planet to share out interesting ideas – Keto cheesecakes are EVERYWHERE on the web.

I tried a simple recipe for cheesecake fluff first, which brought some sour cream to the party for the tang in real cheesecake – but was left unimpressed.  Not only did the sour cream add the WAY wrong tang, the mixture didn’t blend quite fully, leaving me with little nodules of cream cheese which felt really strange when eating the thing.

Only the crust is allowed to have a lumptastic texture.

So I’ll be trying some different recipes – and already have them flagged.