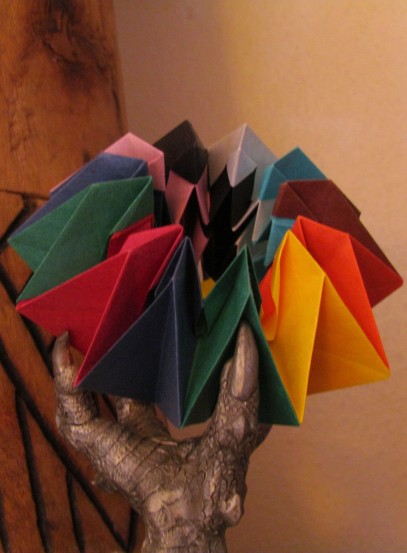 I really have no idea where this post is going.  Seriously.  It’s just a little thing about life in the offices of Corporate America…whatever comes out of my head.  I hope it’s enjoyable…

Like a lot of other folk, I hold a full-time job, meaning for 40 hours out of the week, I leave my home, go to this big building, and sit in a large room with a dozen other ladies.  We do have cubicle walls to segregate this large room into littler ‘rooms’ which only cut line-of-sight.  The walls do nothing to contain sounds, smells, or launched projectiles.

I can neither confirm nor deny my involvement in projectile launchings…

My cubicle is a little space within this big room, one of the smallest such spaces in the larger office.  It’s barely big enough for my desk, chair, a couple of filing cabinets.  Don’t take the wrong idea away from this, though…I’ve been offered larger working spaces in my tenure with my company, and I’ve turned them down.  I like my LITTLE cubicle area, and refuse to leave it for larger pastures.

Everyone in the office gets to pin personal stuff amongst all the accoutrements of business life on their personal cubicle walls…well…personal stuff within reason.  I’m certain that having nudes or horror movie posters or other not-appropriate-for-a-business-culture images on the walls would result in a quick removal of both the image and the display-er…but at least they don’t dictate the exact size/composition/color scheme/personal message of stuff that people are allowed to use to brighten their work spaces.

Unfortunately, I see a time coming when even these little displays of personality will be abolished from the greater office environments in this country, as more workers appear on the scene with gigantic chips on their shoulders determined to wreck this privilege for the rest of us.

My personal stuff on the walls?  To be honest – there’s not much on the walls.  A few coloring sheets & a crepe-paper heart lovingly crafted by my youngest (when he was 8) and a glass dragon I picked up at some tourist trap about a dozen years ago.  Nothing else covers up the ugly beige fabric.

Yes…this is REALLY my desk.

I keep all the personal magic on my desk.  There’s the obligatory photograph of the kids (which is probably a good 12 years old now…), a Wookie, a smurf, and an angry birds pencil topper.  I’ve got a beanie baby constructed from red M&M fabric, and a pen topped with a guy with a huge, cheesy grin and crazy hair.  I’ve got a copy of the SQO’s band’s last CD (of which I designed the cover art-work) and I’ve got a plaster head which could be yawning or screaming in agony (there are days where arguments can be advanced for both versions…) 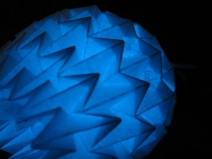 And I’ve got origami….LOTS of origami.

I spend a lot of time on the phone at work.  In today’s business world, if you are going to be working on the phones, you are going to, sooner or later, end up on hold.  The length of this hold is directly proportional to the importance of the title of the person you are trying to reach.

If they have certain initials after their names (CEO, CFO, COO, WTF, LOL, etc…) you might as well write off the entire afternoon.

Although arguments can also be framed the other way – those who are so underpaid and overworked that they are too tired to care about anything except how close it is to quitting time also take their time answering the phone.

So…..work the phones = time on your hands listening to muzak or dead air.  What does one do when they have a receiver plastered to their ear without a voice on the other end to interact with?

Some people doodle on the desk blotter when they’re waiting, some people do a quick search on the ‘net, others drum their fingers on the desk, fiddle with pens, or just scratch at places that beg to be scratched.  Not me, though…

I fold origami things. Birds, flowers, crabs, balls, boxes, tessellations – whatever origami pattern is firmly fixed in my head at the time I hear ‘please hold…’  I don’t bring my expensive origami papers to work, but I use the scrap paper that any office generates, cut down to 4″ squares.

I was once in the phone queue for a very large box-store retailer for 4 origami cranes, 2 lilies, one box, and serious inroads into a tessellation pattern.

By the time I’m ready to retire, I should have at least 1000 cranes folded, which, according to this Japanese legend, means I get one wish to come true.

I’m sure I’ll figure out what to wish for one day, waiting for someone to talk to me… 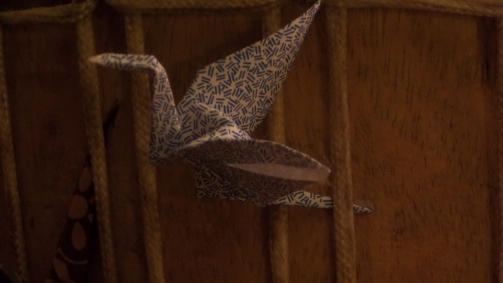 crane folded from a security envelope